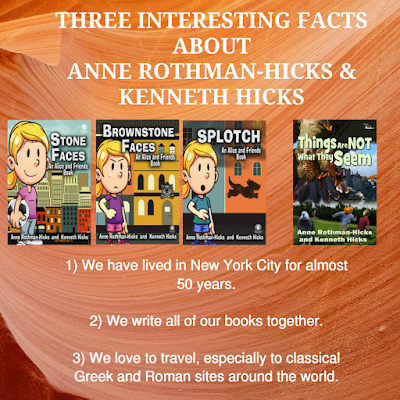 We're thrilled to have had the opportunity to interview these two amazing authors.
Thank you, Anne and Ken, for your time.


Who are some of your favorite authors?


We love to walk, read, travel, and play ping-pong.


Five Children and It.


Mike Mulligan and His Steam Shovel.


They captured our imagination and stayed with us all of our lives.


Lea: Have to admit I giggled with this response. :)

Who is the main character?


Alice lives in New York City and shares time with her two parents, who were getting divorced in STONE FACES. She is athletic and loves to play. She can get very involved with things, and her imagination leads her to places where adventures occur.


SPLOTCH takes place in New York City and in the imagination of Alice and her friends.


Lea: I truly loved the concept behind this book.
How did the story come to you?


One day, we were walking in New York City and saw some paint spilled on the sidewalk that had the shape of a dog. We wondered what would happen if a splotch of paint like that would somehow come to life. The story evolved from there.


Children in grades 3 through 6, and parents who enjoy a laugh.


Lea: Well, I certainly giggled and I'm way over grade 6.


Alice has an attitude that can get her into trouble. Her thoughts are sometimes slightly rude and the predicaments are exciting and fun.


We love when people read and enjoy our books. It means everything to us.


From everyday objects we see while on our walks. STONE FACES came from a stone we found on the beach. BROWNSTONE FACES is derived from some stone carvings we saw in New York City. SPLOTCH started as an actual paint splatter on the sidewalk.


Always write about what interests you. Then what you write will be interesting to others. Also, re-write, re-write, and re-write some more.

For information on Anne and Ken's books, please visit here.
Posted by Unknown at 8:00 AM 1 comments 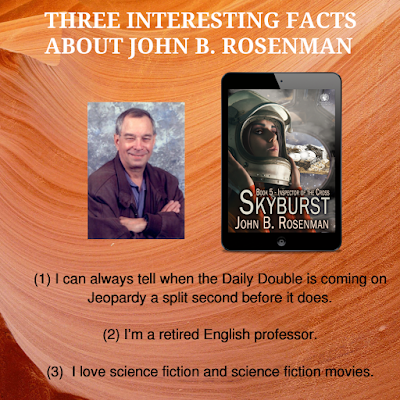 What motivated you to become a writer and at what age?
I grew up when there was no TV and listened to The Shadow and similar programs on the radio in the dark.  They fired my imagination.  Then came books like Men of Iron and SF magazines.  I can recall scribbling cartoon panels when I was really small, five or six or so.  I liked to make up stories.  Oh, yes – my father used to tell me bedtime stories in the dark about a boy and his adventures.

What 3 words describe you as a person?
Neurotic, impractical, visionary

What 3 words describe you as a writer?
Imaginative, spontaneous, painstaking

When not writing, how do you spend your time? Hobbies?
Tennis, reading, and watching movies, serials, and CNN

Describe your desk.
It’s kind of messy and cluttered. Plus, I’ve got a lot on my desk.  To my right, a black tower of the PC; a 24-inch monitor in the center; to my left, a wireless modem and an ancient Samsung printer which I bought for $45.  I’ll keep it at least until I use both my toners, which I bought on the cheap. Hey, I recently bought an HP OfficeJet Pro 6978 so I can scan, copy, and fax.  It’s a black beauty, but I still keep my old Samsung behind it. For that matter, I still keep an ancient 16 inch Dell monitor in the well under the desk. That way, I’ll always have a replacement. Waste not, want not.

Who is the main character?
Turtan

What is his story?
He’s an elite agent or Inspector of the Cross who tries to save humanity from the aliens.   He’s lived 4000 years because he’s travelled in suspended animation between the stars searching for a device which can defeat the Cen.

Where/when does the story take place?
Nearly 7,000 years in the future.

How did the story come to you?
I wrote the first novel in the series over thirty years ago.  The story just came, but also it was partly inspired by Joe Haldeman’s The Forever War, which is also about a hero/soldier who has fought to save humanity from aliens and lived over a thousand years.  Why did I write this?  It was natural, what was in me, and what I wanted to write.  But I write other things, too.

Who is your target audience?
Science fiction and science-fantasy readers.  Much of my fiction has a traditional, Golden Age of SF feel and flavor.  Star Wars, etc.  Mind-blowing concepts that make your imagination stretch.  I hope readers who like such things will be drawn to my writing.

What makes your book different from other similar ones?
My hero has lived over four thousand years and has sacrificed everything to save the human race.  He has had many lovers and mates, and he has outlived his great, great, great, etc. grandchildren.  Also, the mind-blowing concepts, which I introduce to challenge the reader and myself.  Such as travelling down a black hole and what it’s like.

What do your fans mean to you?
Everything.  Recently two readers asked me online when and if my next book in the series was coming out.  I live for that.

Where do you get the inspirations for your book(s)?
Sometimes it’s from almost nothing.  I used to go to a local Barnes & Noble and walk about, letting my eyes roam.  I’ve had stories leap almost whole into my mind in an instant from something I glimpsed.  In other cases, my inspirations are more structured and I can identify a specific cause.  Recently, for example, I was asked to contribute a story to an anthology of “strangely different” western stories.  That inspired me to write a story, “State of the Art” in which I combined a traditional western with science fiction.

Thank you, John, for another amazing interview. 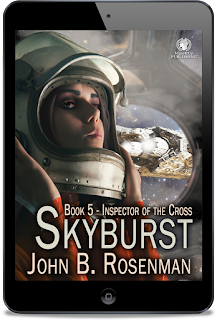 SKYBURST
In Defender of the Flame, Turtan arrived on First Station and organized a plan to defeat the aliens and save humanity. Skyburst looks at many of the same events from the standpoint of Sky, Turtan’s young protégé. In just a few years she grows into womanhood and meets momentous challenges which shape her character and test her courage and abilities. As the great mission to attack the enemy approaches, she constantly asks herself one question: Will she be ready to face the alien threat that threatens to destroy mankind?
Available at Amazon | B&N | iBooks | Kobo | 24Symbols
Posted by Unknown at 8:00 AM 1 comments